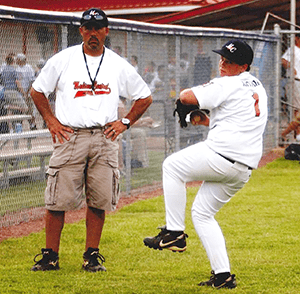 Dr. Harold Antwine coaches his son, Brooks, during a game.

Youth baseball and softball is changing into a year-round sport with the growth of youth travel leagues.

Instead of a season in spring or early summer that lasts a couple of months, many kids play longer, and that means they are exposed to the possibility of more injuries — especially with pitchers, said Dr. Harold Antwine, a board-certified orthopedic surgeon with West Tennessee Bone & Joint Clinic.

“What I’ve seen more and more with these kids is a lot of elbow and shoulder injuries,” Dr. Antwine said.

Dr. Antwine is familiar with the pitching regulations created to protect young athletes. However, the leagues use the wrong metric because they typically cap the number of innings a pitcher can throw, he said.

“I think all of youth baseball needs to move toward pitch counting. It’s the volume of pitches — not the number of innings.”

Anyone familiar with baseball knows a pitcher can generate an out with only one pitch. However, an at-bat can easily soar to more than 10 pitches with a full count and a slew of foul balls. One pitcher can get out of an inning with a handful of pitches while another could throw dozens.

In the Major Leagues, Dr. Antwine noted, managers will rest pitchers for several days after they reach a certain pitch count. It allows the damaged tissue around the shoulder and elbow to heal and increases a player’s longevity.

High pitch counts, regardless of the number of innings it takes a pitcher to get there, can lead to tendonitis and fractures in young players with open growth plates, Dr. Antwine said. And if a player continues to pitch while hurt, his career could be cut short before he reaches high school.

“They can do some irreversible, permanent damage by continuing to pitch,” Dr. Antwine said.

And until their growth plates close, which happens at ages 16 or 17 with boys and ages 14 or 15 with girls, pitchers should avoid throwing breaking balls and curve balls, he said. Instead, they should stick with fastballs and changeups.

Dr. Antwine’s young patients usually come in complaining of pain or discomfort while pitching. The treatment prescribed is typically rest and maybe some Ibuprofen, though Dr. Antwine will order an X-ray if necessary to determine if there is a fracture.

In many cases, the kids can return to play quickly, as long they play a different position until their pitching arm heals.

Some patients require physical therapy to strengthen their injured arms. In rare cases, a patient will have a fracture and need a cast. If the injury caused a significant amount of displacement, surgery could be required to install pins and/or screws.